I joined ABC Television (Dibsbury) in 1962, then later moved over to Yorkshire Television in 1968. Twenty years later, I started my own company, calling it Sync Facilities, and provided a complete post-production service to the likes of British AeroSpace, Halifax Building Society, ITV and the BBC. I was the first independant outside of London to install an AMS Audiofile dubbing suite and an all digital video edit suite with Digital BetaCam and Graham Pattern audio. 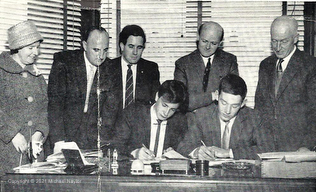 That's me on the left, signing up with ABC Television as a Trainee Executive! Behind is my mother and father, Ken Pike, assistant technical manager, Terry Pace, studio manager, and Norman's father. Norman decided to quit after only a few months.

We were the first trainees to join ITV and also the last. I guess they decided once was enough! Didsbury's converted cinema was a great place to be. I was lucky and remain eternally grateful.

By the late 90's, quality programming had almost reached rock bottom. I'd had enough and the Costa del Sol was calling.

I became licensed as G8WAA in 1979 whilst living in the small market town of Otley in Yorkshire, England. But after only a couple of years, family, work and other interests (including rally driving) took over. That was until the summer of 2019. With help from the RSGB and FEDI, I was able to get back on the air with a new Spanish call. Living and operating on the Costa Del Sol is very nice, and so is getting out portable, but my interest is moving towards Digital Amateur Television, or DATV as it is commonly known.

Mixed in with this is my everlasting hobby of photography. As with most men of many years, I've moved on from SLRs to Leica and it's well known that the owners of these expensive luxury items take far less photos.

Finally, and solely in the name of nostalgia, I felt it necessary to add at least one of my old videos to this site. It could have been one from my Rally days, but I think this one will be a better target for those who like to criticise.

Playing with amateur radio, photography and making videos, allows me to live in the past.